Garak is now a politician trying to reassemble a world that has fallen to division, plague, and blame. A crowd he is addressing wants revenge. Against whom? Anyone will do. He is giving an ill-received speech. But this part is true:

“Alright,” I answered the voice. “But let me ask you a serious question, my fellow long-suffering Cardassian; have you thought about what this world is going to look like if you do strike the last blow?”

Complete silence. Stillness. They stood looking at me like stunned animals.”

The planet Cardassia is grappling for normal. It has been destroyed deeply, not only by the war that took the infrastructure and so much life, but by a harrowing lack of what is needed to rebuild: vision, hope, trust; all those words that mean, if you are in a downward spiral, look up. There is no "up" on Cardassia, so the hopeless look to vengeance to save them.

This hits close to a war between two people in my own life. For me, there is this repeating sentiment that comes whenever I am angry: There is not enough time to fix everything, just enough time to forgive.

Garak is put into the Vinculum, which if I could describe with words is like the tesseract in "A Wrinkle in Time." It's like being awake in a dream. Like hearing the voice of God. Like knowing something you have no way of knowing. Like a song you hear for the first time, but know the next note. I wish I could describe it with words. Somehow the author did it, but I am not quite.

He meets people he killed.

"But they marched in the procession with such pride of place, in the fullness of their youth and power, and with a dignity that’s traveled far beyond my murderous acts.”

He also sees friends, an enemy who became his friend, and his real father. Are they really there or is he seeing only what he thinks these people to be?

This is how he describes the woman he loved:

"And Palandine…so open and alive. The great empty place in my heart.”

He is finding peace within. Is this how he will save Cardassia?

"In the minds of the living, we think we can interrupt the flow of life with acts of alienation that we justify and rationalize. War is a logical extension of diplomacy, someone once suggested. One can argue that murder is a moral act, even an extreme form of friendship. After all, I killed a person I loved. But here, in this Vinculum, as I watch all the souls who have gone before, it’s clear that this separation, this alienation from the continuum, is our greatest illusion."

Then he is pulled out and can't find the words to explain to his non-believing friend what has happened to him.

"I looked at him, wondering how I could ever explain. Parmak was a scientist; he believed that we can reconstruct a society based solely on a rational model. He had no idea that before he could even get to that point, we had to surrender everything."

We can't rebuild with just bricks and mortar. We have to have something more. 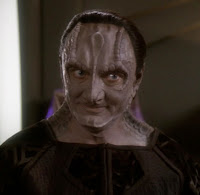 The Darkness and the Light

He was a simple man, a searcher, digging deep underground in the hidden places. His pick struck this and that, ore of every kind, even gold, but he was looking for something more valuable. He wasn't cautious like his archaeologist friends. He knew instictively that what he was looking for was not fragile. He didn't care what worthless riches he had to break through to get to it. There was no need to gently brush aside dust and dirt. He grabbed with his hands, his heart, his entire being, and flung pieces of the cave this way and that. He had no time to waste.

"Mister," the guide called out in the darkness.
"Please slow down!"

But he could not. They were so close.

He pulled at the earth again and again, moving it with only his will when all of his strength was gone. He howled. He screamed. The team behind him was certain he'd lost his mind. They were preparing to pull him out, hoping he didn't bring the passageway down on top of them first.

But, suddenly, a light appeared.

"I found it," he said, his voice quiet and steady. He had struck one final stone and the darkness gave way to a thin line of bright light. It filled the tunnel and it filled the searchers. They had found it.

Email ThisBlogThis!Share to TwitterShare to FacebookShare to Pinterest
Labels: John 8:12, the darkness and the light


It is the Spirit who gives life;
the flesh is no help at all.

The words that I have spoken to you
are spirit and life.

Awake, O sleeper,
and arise from the dead,
and Christ will shine on you.

Many
are
the
plans
of
a
man's
heart,

but
it
is
the
Lord's
purpose
that
prevails.

Email ThisBlogThis!Share to TwitterShare to FacebookShare to Pinterest
Labels: many plans, Proverbs 19:21

One of my favorite characters in all of Star Trek is Mr. Garak. Garak was a former spy living in disgraced exile on Deep Space 9. He was a gifted gardener, of orchids especially, and had become an accomplished tailor. He didn't seem to realize his best days were in those professions rather than in his time spent in treachery and intrigue. What a life!

Elim Garak, whose name should have been Elim Tain, grew up in mystery even within his own family. It seemed he was always trying to figure out exactly what was going on. He was mostly alone, the kind of alone where you are surrounded but no one is looking your way. He had his precious orchids, a pet lizard for a friend, and a beautiful woman who eventually cost him everything.

Garak knows things no one knows, important codes, devious people who can help him save the quadrant, and more than his share of other bad guys he needs to avoid. He was a beloved character, a fan favorite, myself included, but the character himself relinquished so much in the service of the state it's hard to see him as triumphant, though he fooled some of us into thinking he was. To me, he never seems weak or in need. I don't pity Garak. He seems two steps ahead, always, always figuring it out before me. But in the wonderful novel, "A Stitch in Time" (magnificently written by Andrew J. Robinson, the actor who portrayed Garak), we are given more detail about his life. In the novel he comes into focus as an aching, searching soul. That is not how a Cardassian would see himself, of course, but how a human would. Star Trek tells us stories about people out there to tell us about ourselves.

What was it all for? At the end of Deep Space 9, Cardassia is all but destroyed and Garak returns home to help rebuild. His old house is rubble. Everyone's houses are rubble. He begins to stack his debris in elaborate piles, making an at first unintentional monument. It becomes a place to grieve and to heal, the tailor's monument, his way of offering some solace to a people he never could bring himself to be a part of until all was lost.

Why am I writing about this?

Garak's pretend father had a secret faith. He believed in a religion, for lack of a better word, of the people who lived many eons past on the planet of Cardassia. His belief was against the law. He only shared it with Garak on his death bed and in this faith was the only place Garak seemed to find peace. Something beyond himself. Something he did not know all about already, but something that knew him, called him, and welcomed him. He embraced it only because he could not resist it. He was freed by something he had not known was real before he encountered it. It was the first enough he had found.

The book ended too abruptly for me and, apparently, there are more. I'll be reading. I feel like Garak is an old friend and I'm rooting for him. And us.

Hear, O Israel, the Lord our God,
The Lord is One.
Blessed be His glorious Name


Whose kingdom is forever and ever.