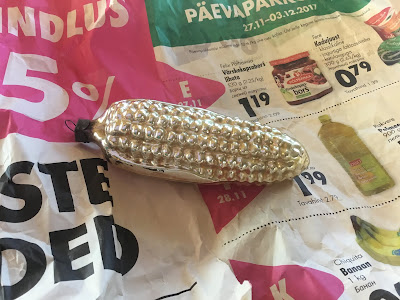 My husband's Grandmother had a corn Christmas ornament like this for many years. We don't know where she got it. In 2014 when she passed, it became ours. Sometime later it crumbled into dust when a heavier ornament fell on it. Of course, we set out to replace it. Thank God for the Internet! We found one and a bit of history along with it. This ornament came from Estonia and was from the era of the Soviet Union. They typically hung on trees for New Year's, as Christmas wasn't a popular holiday...was greatly discouraged...under Communism. The corn and similar ornaments celebrated a plentiful harvest. Our new corn ornament arrived wrapped in newspaper with Cyrillic writing. Our oldest son translated it, a typical sale paper advertising produce. We kept it, of course, to wrap the ornament in each year. The cob is too fragile for the tree. We place it on the mantel instead. I am wondering what the story is behind this frail little thing.

Who owned it originally? What was their story?

Happy Thanksgiving to one and all. 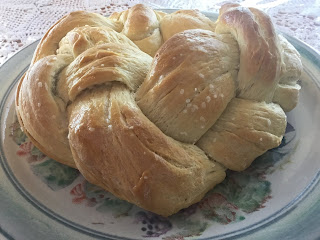 Email ThisBlogThis!Share to TwitterShare to FacebookShare to Pinterest
Labels: Challah, crown, the King is coming

Email ThisBlogThis!Share to TwitterShare to FacebookShare to Pinterest
Labels: Hello from Russia

He brought me out into a spacious place;

he rescued me because he delighted in me.

Email ThisBlogThis!Share to TwitterShare to FacebookShare to Pinterest
Labels: You too?

If you could erase parts of the past, would you?

A cruelty spoken to a friend. I'm sorry.

A thought. Too many thoughts. Most are a waste of time.

Fear. It is the mindkiller, you know.

Not doing something great. Coulda.

Doing something great. I am not sure I was supposed to do it.

Dread of things that didn't happen.

I wonder how it would change me. 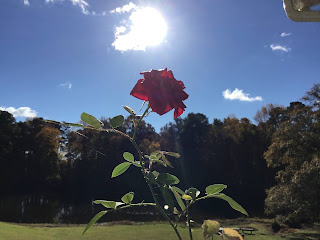 I Know a Man 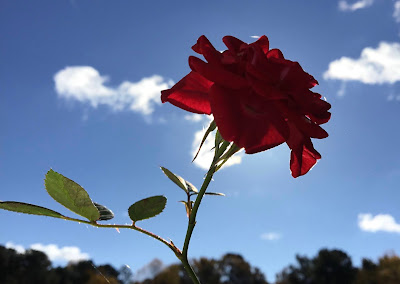 I know a man who looks for hidden you and sets you free.

I know a man who says to the blind like me, "This way."

But why? Who are you? Why did you come here?

He whispers the word Messiah. But what does that really mean? He says he will have to tell me later because I can't see fully yet. He says come walk with me a while in the sunlight. I go. You know why? It's just better in the light. But even 31 years on, I don't think I understand yet. Redemption.  I am redeemed and I don't know why. 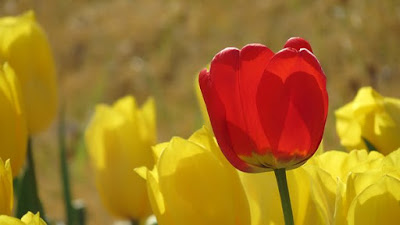 His life ended with forgiveness. To everyone who turned him in he gave a nod and a whisper.

She stared at him like they'd just met. For too long she'd believed him.

"We have to kill them before they kill us," and he ordered in the tanks.

She had no idea what she was doing. Killing, they were actually talking about killing.

"When did I lose you?" He wanted to know.

She had to think about it. One day he was the man in white, the next he was suspect. Then he was guilty.

"It didn't make sense," was all she could say. "They were weaker than us, but we chased after them like they were stronger."

Well you may throw your rock and hide your hand

Workin' in the dark against your fellow man

But as sure as God made black and white

What's done in the dark will be brought to the light

You can run on for a long time

Run on for a long time

Run on for a long time

Sooner or later God'll cut you down

Sooner or later God'll cut you down

Go and tell that midnight rider

Tell 'em that God's gonna cut you down

That morning he didn't expect to be pleading for his life by noon. He stirred his coffee, disregarded was she'd said, and made his plans. He didn't plan to be on that stage, but when every camera and light was on him something brought him down. He confessed.

The words wouldn't stop. He was on his knees with his head down, face to face with what he had done. Conviction is a gift. It's not like the guilt he had managed to ignore. Guilt won't change you. Conviction lifts you up and puts you where you were supposed to be.

They called for his head then. Of course they did. No one calls for their own head. No one blames themselves.

The hope of forgiveness was all he had, so he gave it to his friends and he gave to his enemies. What happened to him after that? If you have ever been forgiven you know.

If you've served, God bless you. If you are serving, God keep you.

She worked harder. A voice assured her it would make her strong. She didn't want to be strong. She wanted that giant rock out of her way and then she wanted to go home and be loved. That's what mattered to her, being needed and wanted. She was broken by the screaming world around her. All their lies stood in the path of the boulder she was pushing up a hill. Evil sings a song. The lyrics say you should waste your time doing whatever doesn't matter.

Ahead of her on the bridge, a man crouched over the rail, about to jump. He was seconds from it, his pain reaching up to pluck him from safety. God heard her screaming. Take him off the bridge. Take him home. Let him see You. Why? I need some light. I need hope, too. The man stepped from the ledge and headed home, shocked that he wasn't invisible. Someone saw me on the bridge. Have you ever been seen like that?

There is Someone who made all life and you along with it. Can you hear Him? A still, quiet whisper. This is what matters. 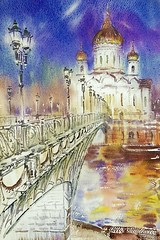 Come to me, all who labor and are heavy laden, and I will give you rest.

Take my yoke upon you, and learn from me,

for I am gentle and lowly in heart,

and you will find rest for your souls.

For my yoke is easy, and my burden is light.

Email ThisBlogThis!Share to TwitterShare to FacebookShare to Pinterest
Labels: come, rest
Newer Posts Older Posts Home
Subscribe to: Posts (Atom)
"In this galaxy, there's a mathematical probability of three million Earth-type planets. And in all of the universe, three million million galaxies like this. And in all of that, and perhaps more, only one of each of us." - Dr. Leonard McCoy