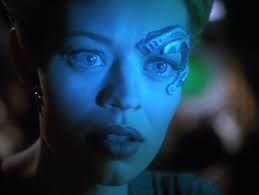 Simple words, but full of breath and life and reason to be. I am not invisible. Here I am! You see me.

There's an episode of Star Trek where Seven, the former Borg drone, is working with the dangerous Omega molecule. But it could explode at any moment, tear apart sub-space, and render warp travel impossible throughout the quadrant! For Trekkies that means all kinds of bad things. But...Omega is perfection to the Borg. It appeals to them as some sort of possibility, just out of reach, that there can be something, no matter how small and brief, that is without flaw. We learn that they tried to stabilize it at some point and destroyed 29 cubes (their ships) in the process. However, they managed to force stability and glimpse it for a fraction of a second. Seven hopes to try again.

What drove the Borg to pursue this, knowing how dangerous it was? What was the payoff? Captain Janeway says some of the Starfleet scientists theorized that Omega was present at the big bang (gasp!) but she does not see it the way Seven does. Seven needs something from Omega. She tries to convince the Captain to let her try, to no avail. It is simply too risky. So she hopes to make it happen anyway.

The whole crew is working to destroy the elements that will make up Omega. Seven is desperately working to both see it and then blow it to smithereens before it can explode and kill everyone. Just a second, that's all I need, it seems she's hoping. Just a glimpse. Please.

She is unable to stabilize the molecule but, just when we think all is lost, it becomes stable on its own. It just forms and holds its shape longer than any scientific effort had been able to manage previously. And it looks at Seven. She stares into it and has the distinct impression that it is looking back at her. She is seen!

Star Trek sometimes talks about God. Or tries to. Kirk, Spock, and McCoy encounter the sun worshipers in the original series and, despite being accomplished scientists and anthropologists, totally miss that they are son worshipers until Uhura points it out. It was kind of clumsy with everyone wishing they could watch Christianity unfold again on a new planet. But still.

Deep Space Nine leaned spiritually with the emissary and the Bajoran prophets/wormhole aliens. But Bajor's prophets had a hard time communicating with the people they hoped to lead. Or crush. I am not sure what they were doing since the Bajorans seemed to be on their own a lot. Although, they did vanquish the Dominion's forces in the wormhole when Sisko bullied them with, "You want to be gods? Then be gods!" And they did free Sisko from his depression by pointing out that he chose to exist in his worst memory.

And Voyager. As far as I can remember, this is the most spiritual of the episodes. It even ends with Seven and Janeway in the holodeck, Seven gazing at a crucifix on the wall of the DaVinci hologram's workshop.

Star Trek tells us about ourselves by looking at us with alien eyes. How they see us tells us what is important in humanity, what makes us who we are. There's this part of me that would love to go out there, traveling through the vastness of space, no longer an odd person but a member of a group of aliens, outsiders, Borg! All the while, pointing out the obvious. Look, a molecule...God! Look, people, reaching out...creation, life!

Always, everywhere I look, God is there, being, making, showing. Some people look for science alone to explain this. To me they are the same, God and science. I am drawn to this, this thing that is looking back at me. Like Seven, seen.

The Omega Directive is season 4, episode 21 of Star Trek: Voyager
Posted by Sandi at 2:07 PM 24 comments: 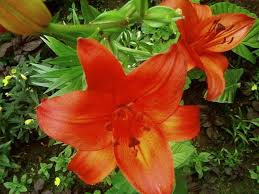 When I thought, "My foot slips," your steadfast love, O Lord, held me up.
When the cares of my heart are many, your consolations cheer my soul.
Posted by Sandi at 9:46 AM 7 comments:

Simcha and the Seed 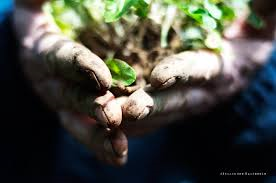 Simcha tended his garden with great care, gingerly cultivating the important things: forgiveness, joy, the kind of grace that leans in and speaks directly to the heart. Rescue grew on a tree by the river, with branches that swept shade over the delicate plants blooming nearby. Simcha watered and pruned all things green and pulled out life-stealing weeds. He sang as he worked because a cheerful heart brings life. He succeeded in his effort and with his garden Simcha fed many souls.

In the evenings the elderly man would kneel in the dirt and bring in the harvest, making heaping mountains of redemption with the fruit of the land. And he'd drag it, carry it, and convince it to follow him to the open markets of his village. From there it would make its way to the backs of pack animals, the bottoms of carriages, and into the holds of great ships about to go out to sea. In this way Simcha's garden was carried to the whole world.

When he traveled to new places he was amazed to see some of his offerings had been transplanted into gardens of their own. Great sweeping vines and graceful trees lined deserts, reaching in to transform the barren landscapes into lush vineyards. He was joyful, exceeding so, at the sight.

"All this," he said, awe-struck, "from just one seed planted in rough dirt under a glaring sun."

It had been a withered, undignified seed. Simcha could not have imagined how it would sprout and bloom, never mind grow into so many varieties. It had only come from his heart. He'd pulled it out himself, with more strength than he knew he had. What he thought was the decaying remnant of pride, maybe selfishness or some other destructive attribute, turned out to be something else entirely. In its atrophied state and buried deeply in good, healthy soil, it became life. Life took root and became blooms of every kind everywhere the light shone and some places it didn't. His effort had been worth it.

That throwaway seed had turned out to be vital. But it wasn't easy to remove. He felt like he'd climbed a mountain to get to the point where he could pull it out. His days were spent reaching and grasping, squinting for a view of the top, hanging there just long enough to realize he needed help. If he needed help, was he really in the right place? But each time help came, with a breeze or a glimpse of hope to lift him up. Each time he encountered resistance Simcha learned to persevere. After a while, it didn't take as long to recover his strength, not nearly as long as it had before. His arms and legs became strong. He had the ability to climb.

And just when he thought he needed to rely on that ability and newly acquired strength, a gust of air, a breath, lifted Simcha from his effort and carried him higher and higher. In a flash, the desperate climber was at the top of the mountain. He'd been lifted. Not by his own hand, but by something he couldn't see, something that was not dependent on Simcha himself.

In his hand was the seed. His pride, withered and defeated. It seemed he should bury it as deeply as he could, somewhere with the unflinching and direct desert sunlight. Someplace that would kill it, so he would never have to deal with it again. He had no idea what would happen once he buried it. After that, he began to look at withered things with a little more expectation.
Simcha is part of a series published online.
Posted by Sandi at 9:44 AM 1 comment:

By day the Lord commands
His steadfast love,
And at night his song is with me,
A prayer to the God of my life.

The land of Zebulun and the land of Naphtali,
the way of the sea,
beyond the Jordan,

Galilee of the Gentiles—

the people dwelling in darkness
have seen a great light,
and for those dwelling in the region and shadow of death,
on them a light has dawned.” 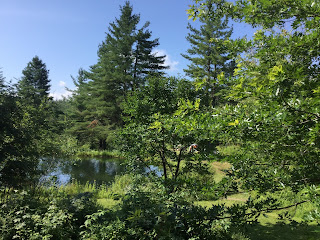 They still bear fruit in old age;
they are ever full of sap and green...

“It is funny how mortals
always picture us as
putting things
into their minds:
in reality our best work is done by keeping things out.”