Simcha and the Mist

Simcha lived near the mountain people but kept a kind distance. He watched them with a smile in his heart and serene love. They worked well together, eager to stay out of the world below and concentrate on life above, in the mountains and hills. He loved being there, to feel the protective covering of the mist surrounding them in the heights. He was of the lowlands originally, the only one willing to climb above and live among the settled clouds and mysterious hill dwellers.


The people of the lowlands feared those above. All manner of conjuring and magic lived in the hills, as the myths went. From one generation to the next the stories were told. The people who lived among the mist of the mountains were to be avoided. They had a mysterious power among them, able to turn people to stone and bring forth wild animals to devour their foes. They would snatch you away, in a second, if you went too far up the mountain, too many  steps to the east, or if you thought about them with any great contemplation.

Simcha tried to tell his friends in the lowlands that these people just wanted to be left alone. They were simple, peaceful souls. There were no supernatural powers, no mysterious goings-on, nothing to fear from up high. But there was no undoing years and years of stories told one to another.

The mist wrapped around Simcha like a warm wool coat. He felt something had called him here, as if his place were no longer with the familiar. He went eagerly, touching the sky with his hope and prevailing against the gravity that would hold him to the low places.

The people of the mist welcomed him warmly as if he were an old friend. His heart was full. His eyes loved the mountains and his soul loved the mist, its people, and the breath of life he felt so close to with them.

He was a sure man, silent usually, but wise. His voice sang out in his paintings, a whisper with the impact of a scream. He was delighted, often, and most of his time was spent in the sheer bliss of joy. He was a happy man, content and at peace with his surroundings.

But the time came when the lowlands prepared for war. Tired of living in fear, they would join together to banish the people of their nightmares. They would destroy the fortresses of the mountains that hung over their heads. Simcha was warned by his family below who expected him to flee for safety.

He was devastated. The mist was just a fog and could not really protect these people, he thought. They were simple, quaint villagers with no weapons and little suspicion. They would be no match for their fierce enemies. The stories of old would not come to their aid. They had no powers or secret abilities. Simcha resigned himself to fate, but he would not leave. These people had become his people and he would not run. He would try to save them.

With great urgency Simcha told everyone he could find about the impending danger from below. He implored them to fashion weapons and take up positions. But to no avail. The people of the mist neither feared nor fretted. There was no word for panic in their language and, though they knew what he meant, steadfastly refused to prepare. Instead, each man, woman, and child went about their usual day-to-day routine as if nothing were coming, no monsters in the distance, no great terror, and nothing to fear.

Simcha was consumed, worried for their safety. He began to pray for a way to tell them, in words they would take to heart, that they must do something. But the more he prayed the fewer words he had for them, as if the Almighty were silencing him, snipping away his warning speech one word at a time.

Cooking pots hung above outdoor fires, children played nearby, and the farmers went about plowing and sowing. The sun sat in the sky. The clouds parted slightly then rejoined. And all the while, Simcha raced to and fro, trying to stop the oncoming slaughter. He tried in vain.

The first arrow struck a stone by Simcha’s house. The second, third, and fourth landed in the dirt, imbedded with such strength only the ends were visible. As the first wave of the attack continued, the people of the mist did not seem to notice. They neither looked up from their work, nor turned to the sounds of arrows splitting the air.

Simcha watched them with disbelief, but his spirit watched them with recognition. As the second wave began, the enemy warriors now close enough to see, the mist moved in to surround the people, forming a barrier between the advancing army and the simple inhabitants of the hills. Though transparent and faint, this mist had the effect of a towering wall, an impenetrable blockade. It was immovable, though it was to the naked eye nearly invisible.

Weapons of every kind were fired. Soldiers and brave men, warriors and infantry of all manner struck the mist, climbed it, pushed, leaned, dug under, and attempted to penetrate it. But it remained unmoved. And the people within went about their work in peace, oblivious to the turmoil surrounding them and the terror at every side. Simcha observed, though one could see in clearly, the people of the mist could not see out.

After many hours, the army, wounded by their efforts against the protective barrier, exhausted and broken, gave up. Some headed back down the mountain. Others slumped where they were and waited for their strength to return.

It was then that the mist parted and the people within saw the defeated army in their midst. Hapless and helpless, the warriors were depleted and ashamed. They had come to win, certain of their abilities, but were slowed, stopped, and defeated before their adversaries had fired one shot.

The simple townsfolk gathered the food from their cooking pots, the bread of the storehouses, and the bounty of vegetables from the land. They stepped through the now fading mist to feed the hungry men and bandage their careless wounds.

The soldiers were stunned. But Simcha was not. He watched with great joy in his heart and sudden understanding. It changed him forever.

Email ThisBlogThis!Share to TwitterShare to FacebookShare to Pinterest
Labels: Simcha

Built 1555-1561 by Ivan the Terrible, complete with horrible legends of blinded architects, the incredible, fairytale-like chur... 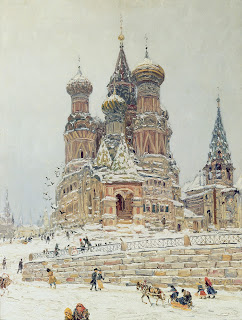