The Destruction of Monuments

Lee and Stuart are two of my old neighbors from college. They used to just stand there. Now one, or maybe both, have been covered in paint and pulled down. 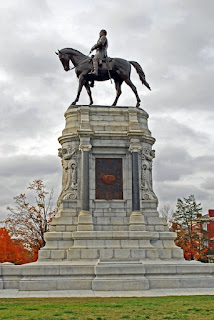 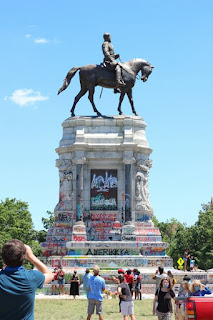 I was never a fan of Confederate history. To me it seemed creepy, even in the peaceful 90's, to have these guys line the most beautiful avenue in town. How I felt watching their destruction, however, is something I find difficult to put into words.

I am not worried about Lee, take him out if you will, I am worried about us. Why? I wasn't interested in American Civil War history. I was more interested in the history of the Russian Revolution. Something bad is happening here. We are losing eachother. 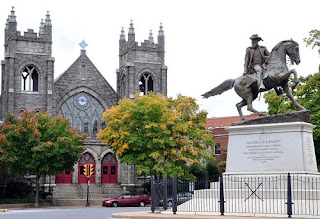 Behind the Stuart monument you can see the red doors of a Lutheran church. I remember standing there one quiet, do-nothing day and my heart was suddenly filled with deep joy. Someone long ago had built that church and hung those doors in honor of the God of my heart. Someone loved Him like I do. That moment is as impressed in my memory as the bright, bold red color you see here. That's the answer to our current problems, the God of our hearts. He's still there. Call on His name. If you don't understand how that will make a difference, try it and see.

Yuri Bezmenov said all this decades ago, but no one was paying attention. Faith is what will save us.