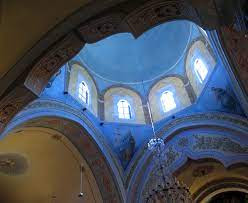 She stepped into forever as though it were the next logical step. One moment she'd been there and now she was here. Heaven. In the distance a structure was being built on the apex of a mountain. In an instant she was there, eye to eye with the dome builder and his creation.

"What do you think it is?" He asked simply.

and for lack of better wording, added, "like the sun."

"I painted it with the sun," he explained.

A grin spread across his face and she didn't know if he was joking.

She recognized him. She knew his story, or at least what she had been told. Boldly, she asked, "You were a monster on Earth. How did you get here?"

He was taken aback by her assumption, but not surprised to hear the question. He'd been asked it a million times already and he'd only just arrived.

"How did you get here?" He parried.

He nodded, "I was forgiven."

They worked together on the dome. Once it was complete they had nothing to put it on. All of Heaven is a temple and the people there are the temple. He held it in his hands instead and took it around to show people. Each one of them asked, "How did you get here?" And each one answered their own question,

"The same way, it must be. I was forgiven too."