She was born under the shadow. At least, that's what the shadow told her. Lie after lie, always looking one way or another, just not straight ahead. The shadow lead her; the lie lead them both.

She was hopeful, a sign that another was interfering in her path. Sometimes she would hear "no" and she would stop, turn a little, pause and wait. She began to hear that no often and the shadow winced every time.

She was glamourous. A girl made of glitter. Glitter made of diamonds and all of the other deceptive stones that are sparkly but useless. All eyes were on her. So what.

She swept them away and there was nothing left. No accolades to feed on. Nothing but nothing. Open air. Empty wide skies. And she loved it.

And she was different. The shadow crumbled, as if pulled away by a string, and the lie stumbled over its own words, unable to stand. 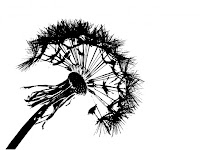 She was free, though she didn't know what that meant yet. She only knew she was different, separated from the lies that had led her and listening intently for that still small voice to say no or now.